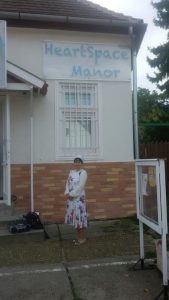 The ITQS Team, Pamela and Peter Mond gave 4 workshops in Hungary; 3 workshops at the Heart Space Manor (Cultural Center and Gallery) Nagykovasci, Budapest and 1 at the Israeli Cultural Center, Budapest.
We taught the ITQS self-calming technique, MicroCalming. Despite the need for translation from English to Hungarian, the participants were very complimentary. They stressed not only the value of the self-calming technique but even more the experience of being in the Quiet Space as a wonderful stepping stone for spiritual development.
Feedback from the Workshops:
“It’s simplicity in all its grandeur was delivered in a very accessible way.”
“Incredibly quickly an atmosphere of intimacy and trust was created in the group…then the attention turned inwards: peace, tranquility and positive energy.”
“This ITQS method supports the inner journey of man”
“The knowledge of the leaders is impressive, enriched by 19 years of experience”
“This should not only be learned by every teacher and psychologist, but also by anyone who wants to quickly and easily bring peace and tranquility into everyday life”
“The technique is fast to learn, efficient (as a coping skill) and brilliant”